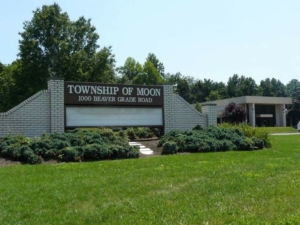 The territory of this township was, at the erection of the county, a part of one of the original townships. In the remodeling of the township lines of the south side of the county, in 1812, the present Moon was one of the four new townships formed. Its bounds include the northern half of what was in ‘Boo First Moon. This township lies in the northeastern corner of the south side, filling in the bend of the Ohio River, which sweeps around it in a majestic curve, with Raccoon township, Independence, and Hopewell for its neighbors. The surface of Moon township is generally hilly and its soil of middling quality, mainly loam. There are no streams of importance within its limits, but Raccoon Creek bounds it towards the west and separates it from the township of Raccoon. Besides this there are a few small runs emptying into Ohio, and it has the advantage of that great river along a good portion of its domain. As shown by the United States Census in 1890, the population of this township was 1092; by that of 1900 it was 1095. In 1900 it had 355 taxables; 10,029 acres of cleared land; 1978 acres of timberland; the value of all its real estate was $552,189; of that exempt from taxation, $33,625, and that portion taxable was $518,564.

Monaca, formerly Phillipsburg, was once within the bounds of Moon township. The history of that important and rapidly growing borough is given in a preceding chapter. Adjoining Monaca, just opposite Rochester, is the new town of Colonial. It was laid out in the year 1902 by the Colonial Land Company, they have purchased about 400 acres of land, all of the well-known farms of the Baldwin and Mellon heirs, Eckert, and other smaller tracts. A magnificent townsite is laid out on the higher ground, streets being paved, sewered, curbed, and otherwise beautified. Mr. H. C. Fry, of Rochester, was the projector naming the new town and company which had put new life and energy into the whole south side district adjoining. It is believed that this is the beginning of a very enterprising and growing community, the great Crucible Steel Mills of the Colonial Iron Company (also projected and started in 1902), is located on adjoining property. In addition, the large Sanitary Manufacturing Works of Arrott & Co. and several other manufacturing plants are in successful operation within the last year. As of the census of 2000, there were 22,290 people, 8,445 households, and 5,767 families residing in the township. The population density was 939.1 people per square mile (362.5/km²). There were 9,200 housing units at an average density of 387.6/sq mi (149.6/km²). The racial makeup of the township was 93.17% White, 3.58% African American, 0.06% Native American, 1.94% Asian, 0.02% Pacific Islander, 0.25% from other races, and 0.97% from two or more races. Hispanic or Latino of any race were 0.99% of the population.

WHERE TO FIND US:
Everdry Waterproofing of Pittsburgh