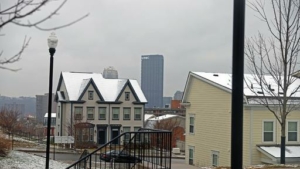 Plum was originally founded as Plum Township in 1788 as one of the seven original townships of Allegheny County.  Although Plum is still a very large community of approximately 30 square miles, when it was first established, Plum Township stretched from the City of Pittsburgh along the Allegheny River to the Westmoreland County Border. Plum originally developed as a rural farming area until the discovery of coal and other natural resources brought new development in the early part of the 20th century.  Today Plum is a diverse community with a wide-ranging mix of new upscale housing developments and historic coal mining towns.  More than 10,000 families call Plum home, including many second and third-generation families.

In 1956 Plum Township re-incorporated as a Borough under the Pennsylvania Borough Code and is governed by the Council-Mayor form of government.  The Mayor is responsible for the oversight of the police department and Council is charged with the operations of the Boro departments.  Council appoints a Boro Manager to handle the day-to-day operations of the Boro. The Boro has a staff of 70 full-time and 10 part-time employees to provide police, code enforcement, building inspection, planning and parks and recreation services.  Fire protection services are provided by four separate Volunteer Fire Companies.  Emergency Medical Services are provided by the Plum EMS organization.  Public water and sanitary services are provided by the Plum Borough Municipal Authority, the Oakmont Water Authority and the New Ken Sanitary Authority.

Plum is home to the Oakmont Country Club, which has been ranked as of the five best clubs by Golf Digest. 10 years ago it came in 5th place, as well as 5th for toughest courses too. A portion of the PA Turnpike runs through Plum from mile markers 49 through 55. Notable Plum natives include many athletes. There’s Frank Marchlewski, former NFL player for the Rams, Falcons and Bills. There’s also Pat McAfee, punter for the Colts and former punter and kicker for the WVU Mountaineers. 2011’s Miss Pennsylvania is also from Plum. Plum is relatively spread out when it comes to population size—around 20% for each age group from under 20 through over 65.Plum is home to miles of riverfront for fishing and boating recreation, hundreds of acres of open space for hiking, biking, riding, hunting and skiing.   Plum is the home of one of the most famous golf courses-Oakmont Country Club-and we have hosted the world at the US Open Golf Championships nine times (in 2025 the 10th US Open is scheduled to be in Plum).

WHERE TO FIND US:
Everdry Waterproofing of Pittsburgh